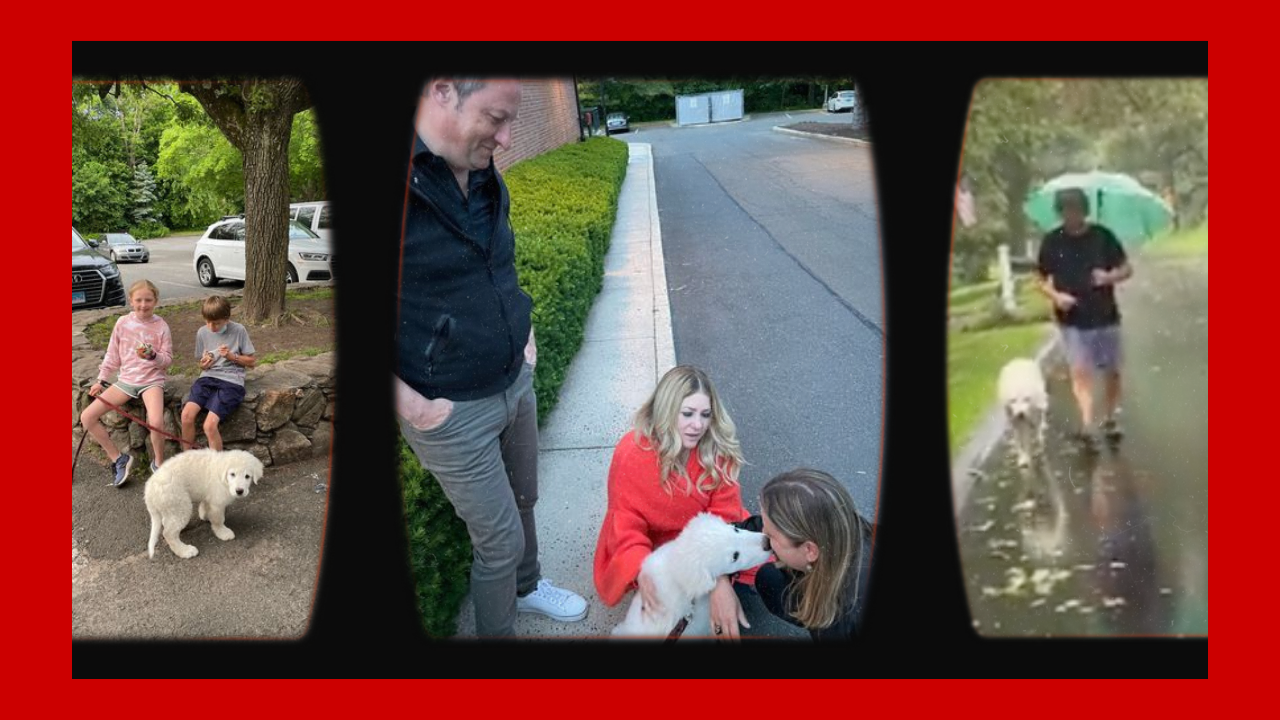 After Mystic spent some socialization time at my canine center with other dogs, it was time to introduce to more people.

Maremmas are an independent breed of dog. They hail from the Maremmano and Abruzzo regions of Italy with their expansive farmlands and open spaces. They are independent out of necessity. They have a job to do and nobody else will be around to help them.

But, Mystic, is far away from that life. We live in the lower Fairfield County region of Connecticut.

Our town may be small by most standards, but there are still a lot of people around. So it’s best to just dive right in and take Mystic into town to meet some neighbors.

The first thing I did was get him used to walking on a leash.

This was hard for Mystic at first but he’s quite adaptable. Todd put in a lot of work with him on this too at Dog Gone Smart.

And it’s paid off handsomely. Mystic is a calm pro on a leash.

Around town he met mostly women and children. Singles and in groups, loud and happy. All kind and gentle people who of course wanted to pet the fluffy white puppy that looks a little like a baby polar bear.

And Mystic tolerated it. Beautifully.

Much like an introvert at party, he can do social interaction, but it takes a lot out of him. Which is fine. He doesn’t need to love playing with people, he just needs to be okay with running into them on occasion.

People socialization was a success.

Or so I thought.

The funny thing about training a dog is that you can plan for a lot of ways the dog may react, but it’s people that can be tricky.

In this case, it was my son Sawyer that threw the monkey wrench into the gears.

Actually, it was tug toy.

Sawyer is great with dogs. He loves playing and being around them. And Mystic really seems to like Sawyer. So when Sawyer introduced tug and keep away as a game , Mystic rediscovered a lost playmate.

Remember, Dave is too old and Eloise is too distant.

Mystic has been separated from his litter mates for several weeks now. Those had been his first social interactions. The ones to whom he was first imprinted. I’m sure the up close and personal game brought up happy memories for Mystic.

So Mystic plays. And he plays hard. Sawyer is getting chased and bitten at every turn now because Mystic sees him as a playmate. A peer.

And dogs love to nip and bite at peers.

So now we’ll have to correct that.

Socialization is ongoing. There will be setbacks. But I think we are doing really great.