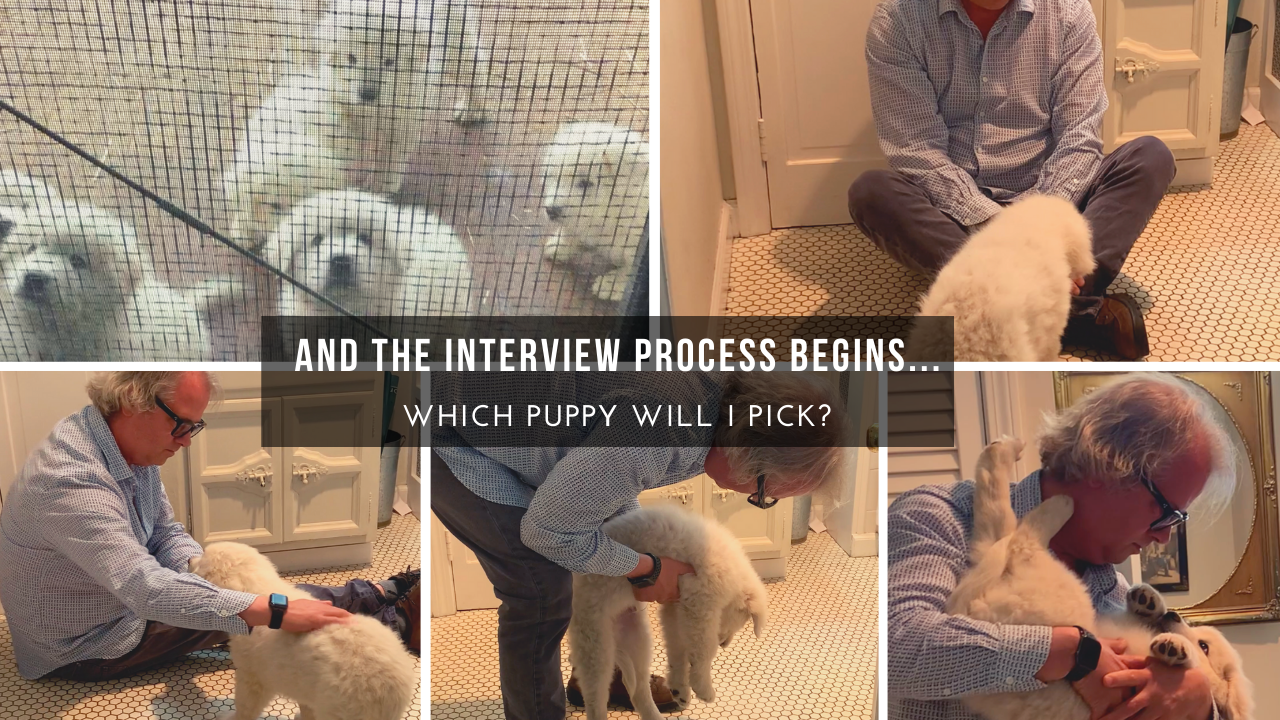 This is an exciting time for the Canine Master family!

From the annoyance and frustration of the predator invasion that has bedeviled my farm this past year has come the solution in the form of a cute Maremma puppy. A puppy bred for generations to do exactly what I need.

Be a protector. A guardian.

When the Maremma breeder offered me the pick of the litter, I could not have been happier. The opportunity to test and choose the puppy that we would take home is a huge benefit.

Some people say that for the average household, Puppy Testing is not that beneficial or even needed. For the average home looking for a companion animal, a check to make sure the puppy will be sociable and trainable is enough.

True. But there's more to it. Puppy Testing can help you find a puppy with the right traits that fit your home and family traits.

Chaotic schedule at home? Look for a puppy that is more easy going. Home with young children? Look for a puppy with a high pain threshold (kids can be rough!) and low sound sensitivity. An older family with a more sedentary lifestyle? It's a good idea to test for a low energy pup that won't require too much hands-on attention.

Pretty much all dogs excel at being great companions. But finding the right fit can make for a perfect companion.

Puppy Testing is incredibly useful when the puppy will be raised and trained for a specific task. Police dogs, rescue dogs, service dogs, and in my case, a farm dog. Testing will help us determine if the dog has the aptitude for certain tasks.

Someone once called it a personality test for dogs. That’s close. The testing is used to measure inclination and instinctual behavior. It measures the likelihood that an animal will exhibit certain reactions and behaviors.

It is not foolproof.

It is more of an art than hard science. Though it is based on proven behavioral principles, so you can use it as a guide.

And no two tests are exactly the same. What I will be testing to see in these Maremma puppies is totally different than what I would test to see in possible police dog recruits. Or a future seeing eye dog.

This is farm dog specific.

What’s more, it’s specific to the type of relationship I will have with the farm dog. Your relationship will be different, so you will need to assess what you are looking for and who you are as a pet parent before trying any sort of Puppy Test.

So what am I looking for?

I have a hobby farm. What will be important to me is…

Testing a Puppy for Socialization

Socialization and the dog’s socialization potential is important for a number of reasons. And this is true regardless of why you are getting a puppy.

A pup’s socialization potential can tell you how much interaction the dog is and will likely be willing to take. How friendly. How playful. How tolerant of strangers.

And the opposite: how standoffish. How protective of personal space.

The test is easy. Have the puppy brought to you in an isolated room with no open doors or places to hide so interaction will be compelled. The dog should not be able to see anybody else either.

You can watch the full puppy socialization test here.

The pup that I ended up choosing showed the best socialization potential of the bunch. Not that any of them were very socialized. It was very apparent that the pups had only really interacted with each other and the mom. They were bonded to each other.

Which makes sense. Maremma breeders often try to keep interaction to a minimum. It’s how the breed is built and has been raised for generations.

But the one I chose seemed very tolerant of me. Not afraid or aloof. He showed confidence with just a hint of shyness and wasn’t reactive to verbal praise. Which is all great for me! I want this dog to be friendly but not so friendly that he’ll be distracted from his main job on the farm.

Testing a Puppy for Submission/Dominance

A Maremma has a history of being a lone sentinel. An independent thinker and doer.

Which usually means that they are not easy to train.

A subset of the dog’s socialization level is the dog’s inclination to submit or be okay with being socially dominated by me.

I started with long, heavy strokes to check for any sort of reaction to being touched in such a manner. Again, he tolerated the stroking and me without any signs of aggression or biting. Not that he loved it. You could tell he would rather be elsewhere, which is normal.

Next I elevated him by just lifting him off the ground by his chest.

And the puppy I eventually chose just relaxed and let it happen. Totally laid back. It was amazing. I expected more of struggle, so it is a good sign for our future training together.

After that I picked him up in my arms and cradled him like a baby while applying body pressure. Because of the position, he naturally starts by looking straight at me. And I look straight back at him.

This position is gently threatening. I am being dominating, sort of lording over him in a position of power.

And he looks away. He submits. Which is huge.

Rather than challenge me, he accepted that I was in control. Again, for a Maremma, this is huge.

You can watch the full puppy dominance test here.

Since I’ll be using this dog as a livestock dog, I needed to make sure he had a low prey drive.

Simply put, prey drive is the instinct to chase. Greyhounds are used for racing (don’t get me started) because of their speed and because they’ll chase that mechanical rabbit for miles. That’s prey drive.

If I was picking in order to train for a police dog or a hunting dog, a high prey drive is ideal.

As a livestock dog, I’ll need the dog to show some playfulness but not so much that he chases the animals around the farm.

A hand towel tied around the middle with a string makes a great analog. As it gets dragged across the floor or flutters about the air a dog’s natural instinct to paw at it or grab it with his mouth displayed.

When the dog begins to tug with his mouth, you need to listen carefully for any sort of growling. That’s a sign of low insecurity which can lead to overcompensation.

My pick showed interest in the prey and played with it without growling. He was more curious than anything and was willing to engage. Once the prey was gone, he moved on.

You can watch the full puppy prey drive test here.

Finally, I tested his tolerance for noises and his fight or flight reflex.

When the puppy was distracted by something else and looking away, I dropped a metal water bowl on the tile floor. You can also use a metal spoon on a metal tray or a large number of metal utensils in a plastic container.

It makes quite the racket.

Paying close attention when I drop it, I can see everything I need to see in a matter of 3 seconds.

My eventual pup startled and jumped upon hearing the noise. But rather than barking or yelping and running away or hiding, he spun to face the noise. He withdrew and then investigated.

He wasn’t scared off nor was he oblivious to the noise. He also didn’t charge in blindly. His response was appropriate and measured.

The puppy I chose, whom we named Mystic, has all the right innate instincts to be a good fit for both my family and my farm.

He lacks some socialization with people but I am optimistic we will be able to work on that and work together well on the farm well into the future. 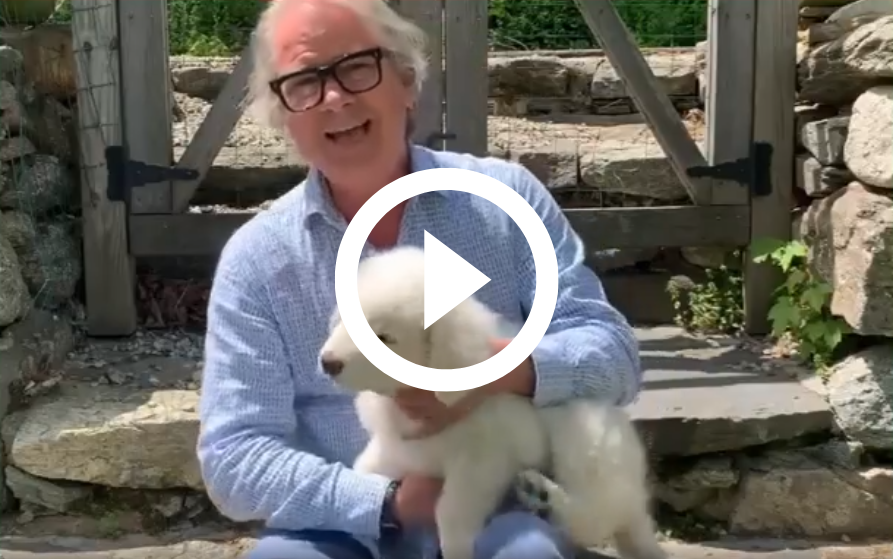 You might also like: Enter the Maremma: Why I chose a Maremma puppy for our hobby farm