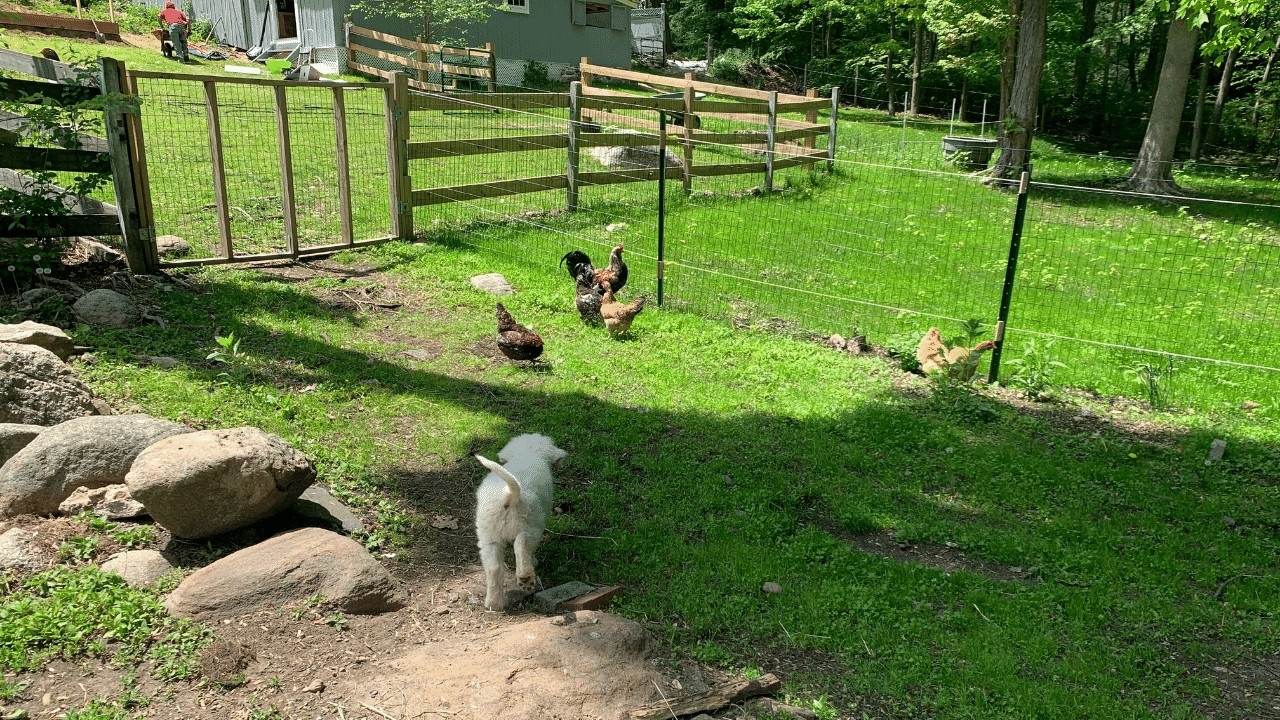 I have been working with Mystic on socialization on the farm.

Remember, Mystic is going to be a farm dog. He will be working with birds and animals on a real farm. And animals are less predictable than people or even other dogs.

The wild birds and domesticated chickens I have on my farm in Connecticut are not trained. They don’t follow a script. Mystic will need to get comfortable with the natural comings and goings of wild birds.

I even have some horses that Mystic will need to be aware of. Nobody tells you that horses can be ornery, but they can. Unless I want Mystic getting kicked in the face by a 300 pound horse, I have to teach Mystic to be wary and avoid confrontation with his much bigger mates on the farm.

Remember, he’s a puppy. This is all new to him. He may have instincts bred into him over generations, but the day-to-day reality takes some getting used to.

As part of his training, I regularly let Mystic into the barn to mingle with the chickens.

He usually stands within the flock without reacting and the chickens gather around him without fuss. Today, a chicken was acting unusually curious about him. It kept approaching and “jumping” in front of Mystic. Maybe Mystic thought it was a game. Maybe Mystic thought the thrash of wings in his face was an annoyance.

Mystic pounced and the chicken was killed.

There was no malice or aggression but for a dog that is supposed to guard chickens: not great.

But no disaster is a total loss. It’s all a teaching opportunity. For both of us.

Weeks ago my son had a different setback with Mystic. He taught Mystic a keep-away game that seemed fun at the time. Until Mystic took it as go-ahead for rough play with him. Mystic stopped seeing my son as a leader to be followed and saw him as a playmate. A litter mate. Another pup like himself he could play with.

Methodically we used verbal feedback techniques and a water bottle to change Mystic's behavior with Sawyer. We used the setback as another opportunity to teach and address behavior.

And so it is with the chickens. It’s a setback but not something from which we can’t come back.

There will always be setbacks. No training happens without a few road bumps.

The trick is to not give up. To not throw in the towel and convince yourself that the cause is lost.

Sometimes you need help. I reached out to a few Maremma breeders for advice.

The solution I learned was pretty simple: training and conditioning. Mystic literally needs to gradually get used to being around the chickens and I cannot take anything for granted.

While Maremmas are instinctively good at guarding animals, they still need to be trained to it.

Mystic doesn't have an older Maremma parent to teach him the ropes. The job falls to me to keep doing what I have been doing BUT more of it. I need to make sure that he is comfortable in every stage of the process before leaving him alone if I am to expect the best results.

Moral of the story? Don’t give up. Training is hard. Patience will be rewarded.